When I was five or six years old my favorite football began to come apart at one end of the laces and as I continued to play with it the problem obviously worsened.  It did not take long for the ball to reach a condition in which it was basically unusable.  As an adult in today’s world, I would simply log on to amazon and order another relatively inexpensive ball and call it a day, no big deal.  As a child in a world with no Amazon, no internet, and no home computers, it was a very big deal.  When I showed the issue to my dad he quickly reassured me that the ball could be repaired and that we just needed to get some thick thread to do so.  He got the thread and sewed the seam back together, and off I went with my ball again.  This was the first time that I ever admired the practical skill of sewing. 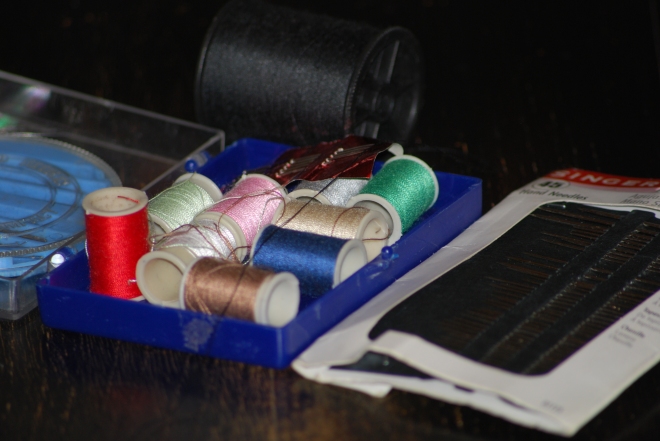 Before sewing revived my football it had only been a nuisance to me.  I was on numerous occasions forced to stand still while my mom hemmed my pants prior to my football dilemma and was often bothered by my mom’s loud sewing of dresses and outfits for my sister.  Neither of those tasks interested me.  However,  the “manly” uses for needle and thread intrigued me enough to learn some basics of sewing over the next few years and it has come in very handy in extending the life of clothing, my kids’ stuffed animals, seats, tarps, and numerous other items.  With that being said I can now ask the question that inspired this post to begin with.

I am aware of the fact that sewing is looked upon as a “woman’s” task, and if I had forgotten at some point in my life I was reminded the first time my wife walked in on me sewing up some old underwear that I was not willing to part with yet and called me something along the lines of “Suzie homemaker”.  It did not bother me, but I guess it did sort of surprise me.  I view my ability to sew pretty much the same way that I view my ability to weld.  Two pieces of material are apart and I want them to join together, so I sew it or weld it.  I do not think that I am alone either.  I have no official record or log book, but over the last decade or so I cannot recall hearing any woman under the age of 40 reference the repair of anything through sewing.  On the other hand, I can easily think of at least ten different male friends or family members of mine in the last five years talk about sewing something that needed repair.

I am all about sample size and completely understand that my small circle of friends and family are more than likely not representative of the nation, but it is all that I have to go on.  I have never seen my wife sew, but she has seen me sew.  I guess it is possible that the availability of affordable clothing is so much greater than in the past that it makes more sense to just buy another than repair what someone already has.  It is also possible that men tend to hang on to things well past the point that they should and just sew out of desperation to hang onto a favorite clothing article or possession.  As a male, I personally carry a sewing kit in my tool box at all times, I view it the same way that I view a wrench or screwdriver, a multi-use tool.  Sewing is a great skill to possess, and though I am not good at it, I am just good enough to say with confidence that you will never catch me with my pants down for long.  If you would like to dabble in the manly art of sewing check out the links to the how-to book and sewing kits below.

Thank you for visiting my site.  If you found this information useful or entertaining please like, comment, and follow my blog, it would be sew great of you.  I know that is corny.

One thought on “It’s Sew Manly.”